Focus on Women in Film 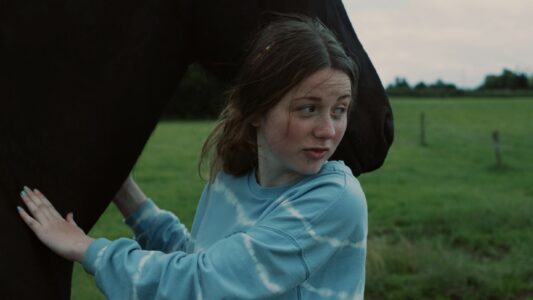 Gender equality in film and television is an issue that First Cut! has turned a spotlight on through a number of events in previous years. Creating a more inclusive film industry is a goal that a festival with a focus on supporting future filmmakers cannot fail to support. This Focus on Women in Film is conceived in this spirit. It celebrates three compelling and distinctive female voices in Irish filmmaking today through showing their films and sharing their insights about their creative processes.

Ayla Amano
Ayla Amano is a director, writer and producer. Originally from New Zealand, she now resides in Cork. Her most recent short, 4×4, premiered at Cork International Film Festival in 2020 and received Special Mention for Best Director. She was shortlisted for Best Irish Director and Best Irish Short at the 2021 Kinsale Sharks.

She studied at South Seas Film and Television School in Auckland and spent several years directing, writing and producing short films, documentaries, commercials and branded content. She also worked with youth advocacy and mentorship programmes. In 2018 she relocated to Vancouver and focused predominantly on documentary, co-directing and writing a feature documentary for the Canadian Broadcasting Corporation (CBC).

4×4 (2020)
In rural Ireland, tensions mount between teenage sisters as they each grapple with their ties to the family farm.

Megan K Fox
Megan K. Fox is an award-winning writer/director of film and TV. She is passionate about telling compelling, intimate stories of self-discovery, adolescence and overcoming. She has received commissions and funding grants from RTÉ, Arts Council of Ireland, O2 Think Big and more. She is a graduate of the MA Directing course at Met Film School London, and since graduating in 2015, has received over thirty awards for her work from internationally recognised festivals. Alongside her film career, Megan regularly directs on long running RTÉ soap Fair City.

The Shift (2018)
It’s the last night at the Gaeltacht, and thirsty fifteen-year-old Denise is determined to get the shift against all odds.
Cailín Álainn (2019)
A tender, bi-lingual drama about a transgender teen coming out for the first time at a cross-dress disco in Irish College.

Bonnie Dempsey
Bonnie graduated from the National Film School IADT in 2000 specialising in cinematography and directing before working for several years as a camera assistant in the film industry in Ireland and the UK. In 2004, she started shooting and directing her own projects which led to television work as a shooter / director. Over the past fifteen years she has worked as a television maker with experience in almost every broadcast genre. Through her company Dyehouse Films, established with her partner, editor & producer David O’Sullivan, Bonnie has kept a keen focus on creating compelling and engaging work for young audiences. Their award winning short drama films have enjoyed global success on the film festival circuit as well as screening on children’s broadcasters and in educational settings worldwide.

Tina Times Two (2020)
A surreal coming-of-age fable about a lonely girl whose wish comes true when she gains a magical friend: an exact double of herself!
The Girl at the End of the Garden (2019)
A slapstick comedy about an unhappy young girl whose life is turned upside-down when she finds a mysterious runaway with psychic powers in her back garden.
All in Good Time (2018)
A comic fantasy about two children, one in 1918, the other in 2018, who magically communicate across time through messages in a bottle and help solve each other’s problems.

The screening will be followed by a two-part Q&A moderated by Linda Curtin. Linda is a filmmaker and Film & TV Coordinator for Screen Wexford.