This screening will follow the Schools & Youth Groups Screening 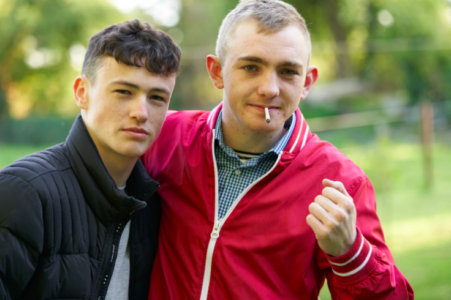 Christy is the second short from acclaimed director Brendan Canty and writer Alan O’Gorman. It is about a 16-year-old school-dropout who interviews for a job, but when he’s let down by his brother he lashes back and looks to his friends for support.

Brendan Canty has had a long involvement with First Cut! and is a mentor of the YMVC-Youth Music Video Competition. The festival is particularly delighted to welcome him to present his new film. He will be accompanied by its stars, the formidable Daniel Power, Jamie Forde and Darren Stewart who are all part of the host of young local talent who had never acted before.

The video for Kabin Crew’s Ya Boy will also be screened. The Kabin Crew is a collective of young rappers and singers who work on songwriting and recording projects with the inspiring GMC Beats at the Kabin Studio, a fantastic resource for the youth of Hollyhill, Fairhill and Knocknaheeny supported by Music Generation Cork City. Some members of the Kabin Crew had roles in Christy and the Ya Boy video was directed by Brendan Canty.

The screening is followed by what is guaranteed to be a lively panel discussion with Brendan and the actors moderated by journalist Ellie O’Byrne.

The event will conclude with Brendan presenting the Best Schools Film Award.