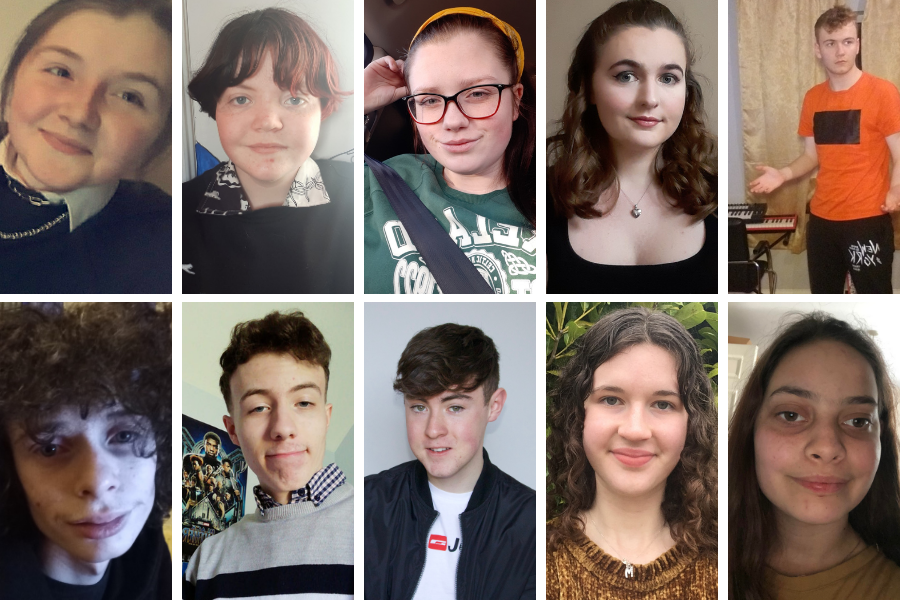 The First Cut! Youth Advisory Council is a rotating group of young people who act as festival advisors each year. The group introduces a youth perspective to First Cut’s development and planning, and in return get to meet like-minded peers interested in filmmaking. The Youth Advisory Council (YAC) also take part in specially programmed workshops, as well as taking on significant roles during the festival itself. Most prominently, they select the annual First Cut! Youth Council Award, for which they choose a favourite film from the festival programme. We’re excited to introduce you this year’s council!

Hi, I’m Aislinn, I’m 16 and I’ve been involved with Cork Young Filmmakers for nearly three years and I was a member of the YAC last year also. I was lucky enough to have a short film that I worked on screened at the First Cut! in 2020. The community I found within young filmmakers in Cork has changed my life and I have made amazing friends. Definitely attend the festival to have a great insight into film – you never know, you might love it!

My name is Ambrose and I’m 17 years old. I joined the youth council as an opportunity to learn more about filmmaking and to work with others my age who are also interested in making films. I’m really looking forward to trying to workshops and seeing the films that everyone has made

Hi everyone, I’m Emma, I’m 17 and from North Cork. I got involved in First Cut last year when I made a short film that was screened at the festival and given my keen interest in film I joined the Youth Council. It has been one of the best experiences of my life and if you’ve any interest in films at all I urge you to take a look at the Festival and give short film making a go! It’s so worth it!

Heya, my name is Katelynn. I’m 17 years old and go by any pronouns. I have been filmmaking for the last 6 years. I developed an interest in filmmaking from my love for acting.

I’m Gearoid, I’ve lived in Ireland since the day I was born and have developed an interest in the world of filmmaking. I currently make small short films and dumb videos on my Youtube channel and stream on Twitch to improve my improvisation. I specialize in directing and editing with occasional acting. As the great Genghis  Khan once said: watch that xcypress guy on Twitch, he’s pretty good.

My name is Liam, I am 18 years, and I’m from North Cork. I have participated in a number of Cork Young Filmmakers workshops in Midleton; the last one involved the making of a short film called July, which was well received and I really enjoyed helping to write, direct and film with the group. I’m most interested in the acting and script writing areas of filmmaking, and I am currently working on some ideas for short movies to film with my friends after lockdown.

Hi, I’m Liam and I’m 18 years old. I have been working with the festival for 3 years now, and it’s always so much fun. I’ve made lots of short films in the past, and have worked with my school on a number of video projects such as a virtual open day video that I directed. I’ve also worked on films that were to be screened at the festival in previous years, such as the Clock Gate documentary. I can’t wait to see all the films on offer from around the world!

Hi, I’m Michael, and I’m an award winning Film Director and Actor from Ireland. Recently, I starred as the protagonist in the Irish Drama film ‘Covid Éire’ which became a national hit across Ireland and won a major award at the 2020 IndieCork Film Festival, and was acquired by Amazon Prime Video. I directed the 2019 Irish Thriller ‘Final Shot’ which won the audience award at the 2020 Ireland’s filmmaker of the year awards and was nominated for Best Directing. Next year, I will appear on the BBC TV Series ‘The Kingdom’.

I’m Muireann, aged 16, and I’ve been participating in activities with Cork Young Filmmakers for almost two years, participating in workshops, and I can safely say it has been one of the best experiences of my life! I love writing and also editing, but whatever element of filmmaking you are interested in, there is so much to learn. Just a few of my favourite films: Brooklyn, Pulp Fiction, Les Miserables, Hacksaw Ridge….there are so many more but I can’t list all of them!

Hi, I’m Rosa, I’m 17 years old. I’ve been to Young Cork Filmmakers workshops for 2 years and I joined the Youth Advisory Council because of my interest in filmmaking. My main interests at the moment are in first AD (assistant directing) and acting.