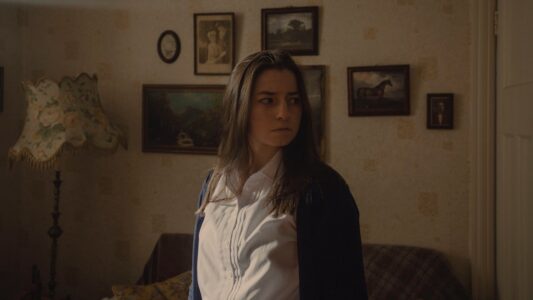 An inspiring interview with the director of the award winning new Irish horror film You Are Not My Mother. Kate’s first feature is currently taking festivals by storm and she will discuss the path that led her to its success.

You Are Not My Mother takes place in a North Dublin housing estate where Char’s mother goes missing. When she returns Char is determined to uncover the truth of her disappearance and unearth the dark secrets of her family.

Writer/Director Kate Dolan graduated from the National Film School, IADT in 2012. Along with directing many commercials and music videos over the years in 2014 Kate was selected for Berlinale Talents, where she wrote and directed the short film Little Doll. The film premiered at the Berlinale in 2016. Catcalls, Kate’s next short film funded by Screen Ireland in 2017 premiered at many of the leading international festivals including BFI London Film Festival, Fantastic Fest and Fantasia Film Festival, winning Best Short Film at the Young Director Awards Ireland 2018. In 2016, Kate was chosen to take part in the Guiding Lights, the UK’s leading mentoring scheme for filmmakers and in 2019 was listed as one of Ireland’s leading emerging creatives under 30.

Kate will be in conversation with Chris O’Neill, filmmaker, writer and head of cinema at Triskel Christchurch, Cork. He is a noted expert on horror cinema.