Youghal: The Home of First Cut!

Youghal, the most easterly town in Co. Cork, is known to be a gem in Ireland’s Ancient East. It is also the home of First Cut! Youth Film Festival. This beautiful seaside town, packed with historical interest, has been host to the festival since 2014. In that time, it has become far more than just a festival venue – it is part of the very fabric of First Cut! The massive support from Youghal audiences and the hugely generous local business sponsorship that the festival receives year after year is matched only by the consistent participation of Youghal’s wonderful young people as volunteers, festival goers and, in many cases, budding filmmakers. This is the grassroots lifeblood of First Cut!

The Festival has been based in two main Youghal venues:

The Mall Arts Centre is a spectacularly sited 230-year-old riverside arts venue. The first floor performance area in Youghal’s historic town hall has been completely renovated as a multi-purpose theatre and arts venue. The stage and performance area can be adapted to a number of uses including film, theatre performance, dance, concerts, readings, exhibitions, workshops and public meetings. For further information please visit: themallartscentre.com

The Regal Cinema opened its doors in the summer of 1936. The first film shown at the cinema was the Irving Berlin musical Top Hat, starring Fred Astaire and Ginger Rogers. The Regal has been an integral part of the East Cork community since its opening and many locals have spent time working there. It has recently undergone an extensive transformation. The new owners have worked hard to retain as much of the existing heritage and history of the cinema throughout the works while adding modern comforts and facilities. The cinema is of huge importance to the people of Youghal. regalcinema.ie

And to find out more about Youghal, please visit youghal.ie This website contains a wealth of information about accommodation, dining and other activities for visitors. 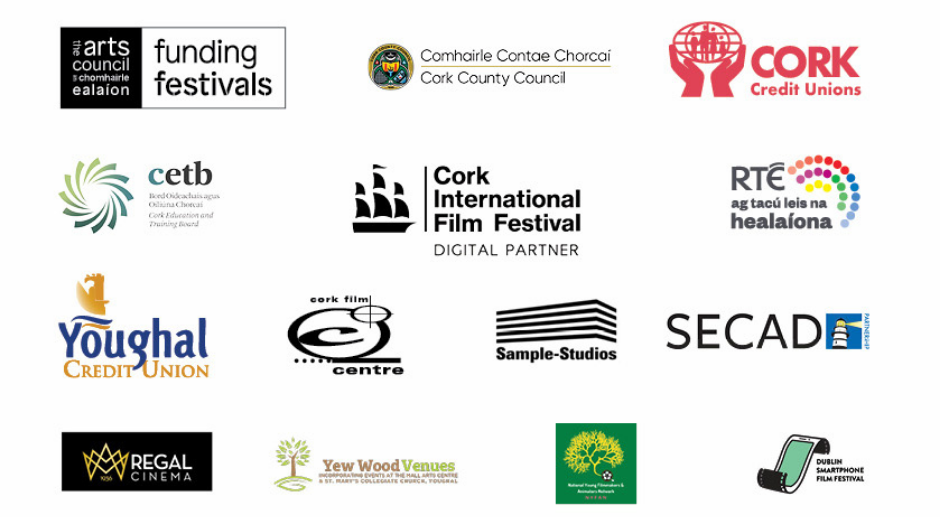 A big thank to the local businesses that have advertised in our 2022 festival brochure – you are our besties!

The support of the local business community is hugely appreciated by the festival, without their support First Cut! would not be possible. To become a friend of the festival, please email firstcutfilm@gmail.com or phone +353 86 813 9019.

A very special thank you to our main funders The Arts Council of Ireland and Cork County Council, to Cork Education and Training Board, to Cork Credit Unions sponsors of the TikTok Filmmaking Competition, our ‘Animania’ sponsors Youghal Credit Union, our Digital Partner Cork International Film Festival, and our Workshops Series sponsors The National Young Filmmakers & Animators Network.

A sincere thank you to everyone who helps make First Cut! happen.

Everybody involved in this not-for-profit festival volunteers valuable time and energy to make it happen. Thank you!

For enquiries or to become a Friend of the Festival: