John McGrath: My Life in the Clocktower 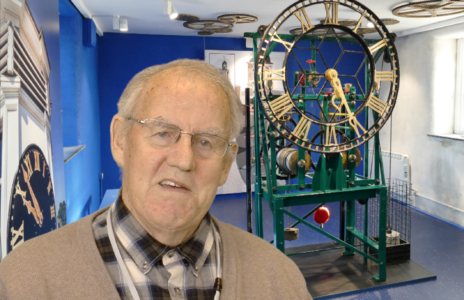 The premiere of a brand new documentary on Youghal legend John McGrath made by students at Pobalscoil na Trionóide, the local secondary school. McGrath was the last person to be born in Youghal’s iconic clocktower. A compelling raconteur, McGrath shares vivid and personal memories of life growing up in this unusual home and of mid-20th century Youghal in general.

This film is accompanied by Youghal: An Historical Overview, another documentary made by the same group of students in which local historian and author Kieran Groeger provides historical background to the town and clocktower.

Following the screening, we’re delighted to welcome Comhaltas who will perform three tunes from the newly launched CD Oidreacht Eochaille (The Heritage of Youghal).

The evening will conclude with a public discussion with John McGrath, project mentor Max Le Cain, and Liam O Leary, Ciara Griffin and Ryan Murray, three of the young filmmakers involved in the film. This will be moderated by Kieran Groeger.